Over 240 scientists in the fields of taxonomy, identification, preservation, research and bioinformatics of microbial resources from 41 countries around the world registered online to participate in the conference. More than 180 participants were online at the same time during the conference on the 23rd.

WDCM has launched of GCM 10K Prokaryotic Type Strain Sequencing Project for three years, marking the Global Catalogue of Microorganisms project has begun to enter a new stage (GCM 2.0). The project will establish a cooperation network for type strain sequencing and functional mining, and complete genome sequencing of over 10000 species of microbial type strains in five years. There have been over 24 microbial resource conservation institutions from 18 counties joined the project and sharing type strains. Until now, 1549 strains have been sequenced. Since the formal start of WDCM’s cooperation with IJSEM on sequencing of novel species, WDCM has already sequenced 62 strains from candidate novel species submitted by taxonomists from 9 countries. 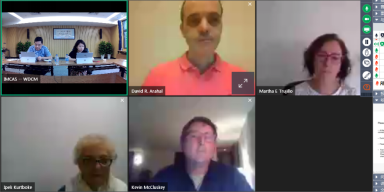